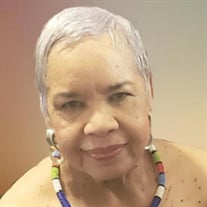 In lieu of flowers please use this donation link https://giving.pvamu.edu/poindexter

Send flowers to the Poindexter-Blackshear family.