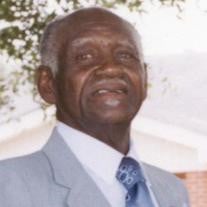 The Life of Claudia Busby On April 15, 1926 in the rural community of Sunnyside, Texas, Edward and Nannie Busby became the proud parents of their fifth son, whom they named Claudia. Everyone would affectionately call him “Fat”. He was blessed to be a part of a large family of fifteen children, twelve boys and three girls. He was a member of Mt. Zion C.M.E church where he served as a steward for many years. Claudia was the Worshipful Master of Armstrong Lodge No. 101 until Armstrong Lodge consolidated with Lone Star Lodge No. 85. He was an active member of the Lodge for over fifty years. His formal education began at Bob Burton School in Sunnyside. After moving to the “bottom” with his family 1/1/1940 he then transferred to the Clemons School and then to Prairie View High School where he graduated. He later attended Prairie View College of Texas (Now PVAMU) in the 1940’s, received a diploma in Tailoring and began working in Houston for a Major Tailoring Company. He did major alterations and could sew anything without a pattern. After a few years he returned to his farming roots. During this time he met and married Melba J. Blunt and to this union three children were born. Claudia enjoyed the outdoor life and chose farming and ranching as a career. He was a jack of all trades. Growing watermelons was his greatest passion. He was known as one of best watermelon farmers in Waller County. He was preceded in death by his daughter: Cynthia Faye Jackson and brothers: Edward Jr., Jessie Sr., Mac Arthur, Robert, Walter T, Theodore and Walter W. He leaves to cherish his memory: his wife, Isabella, children: Ruth Bivings (Clinton), Robert Busby, Segretta Woodard-Baisden, John Busby (Latricia), Lovie Busby, Claudie Busby (Vietta) and Dudley Anderson (Patricia).Sisters: Annie Morehead, Nannie Francis, and Dorothy Preston. Brothers:Lloyd, Forest (Barbara), Arlington,and Melvin. A host of grand and greatgrand children, aunt (Roberta Ivey), nieces, nephews, cousins, other relatives and friends. He was called home to be with the Lord on Monday, January 2, 2012 after a lengthy illness.

The Life of Claudia Busby On April 15, 1926 in the rural community of Sunnyside, Texas, Edward and Nannie Busby became the proud parents of their fifth son, whom they named Claudia. Everyone would... View Obituary & Service Information

The family of Mr Claudia Busby created this Life Tributes page to make it easy to share your memories.

The Life of Claudia Busby

Send flowers to the Busby family.