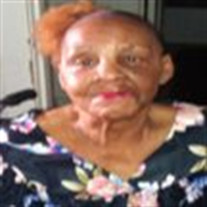 On June 23, 1934 a baby girl, Cleo Williams was born to the late Aaron and Mary Williams in Hempstead, Texas. She departed this life on June 3, 2014; She was preceded in the death by her parents; husband Lorenzo Wolf; one daughter Ida Mae... View Obituary & Service Information

The family of Mrs. Cleo R. Wolf created this Life Tributes page to make it easy to share your memories.

Send flowers to the Wolf family.