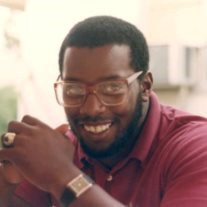 Dale V. Henderson Jr. was born to the late Dale and Jo Ann Henderson on September 21, 1960 in Indianapolis, Indiana. Dale’s zest and passion for life was evident in every venture that he pursued. He was trustworthy, enthusiastic, and supportive. As a young boy in Indianapolis, Dale became active in the Boy Scouts and learned how to develop his skills in problem-solving, hard work, and dedication. While in high school at Arsenal Tech and College at Indiana State University Dale flourished in athletics. His love for sports led to an undeniable focus and humble power that allowed him to compete with distinction. Dale’s remarkable athleticism holds records at Arsenal Tech High School to this day. Dale graduated from Indiana State University, in 1981 with a B.S. in Graphic Arts Management/Technology. Dale had a creative talent and passion for transforming thoughts, memories and ideas into visual works of art. Dale’s tact, intelligence, and his hard work ethic made him an irreplaceable asset to his colleagues, clients and friends throughout his career. Most recently, Dale had the pleasure of sharing his gifts with his colleagues and friends at Metoyer-Roy Printing, Ltd. Dale met the love of his life, Cassaundra while attending Indiana State University. The two were united in marriage on June 1, 1991 in St. Louis, Missouri. The couple was a true reflection of compassion, friendship, and genuine love to friends and family alike. Dale and Cassaundra spent over 35 years together on a journey that only they lived, but others admired and respected. Dale and Cassaundra joined First Metropolitan in 1991 where they grew and matured in their faith. Dale was active in many ministries throughout the years, and was a dedicated member who enjoyed serving others. Dale was involved in the Usher Board, First Men Group and the “world renowned” Burn Brothers where he fellowshipped, served, and ministered to others. Like his parents, Dale saw the needs of others and was not complacent in seeing these needs unmet. In response to that need and desire, Dale was instrumental in initiating and running The Angel Food Ministry at First Metropolitan. Dale was not only known for his wonderful smile, but for his gentle, friendly, and respectful manner toward others. Whether it be a phone call out of love to family, lending a helpful hand at church, or sharing his love of music and films with others, Dale’s engaging personality comforted many. To many who saw Dale, his appearance may have been towering and commanding, but to those who knew him best they saw him as a cool, calm and humorous presence that could infuse the room. Dale departed this life on February 23, 2014, but entered his eternal life with Our Heavenly Father. Dale was a man of great faith and service to the Lord through his works. Dale leaves behind his wife: Cassaundra; sisters, Leslie Burnside-Harris (Ray) and Gail Henderson and a multitude of relatives and friends that who knew him, loved him and will miss him dearly. Dale lived his life to the fullest and strived to enrich the lives of all those that he encountered.

Dale V. Henderson Jr. was born to the late Dale and Jo Ann Henderson on September 21, 1960 in Indianapolis, Indiana. Dale&#8217;s zest and passion for life was evident in every venture that he pursued. He was trustworthy, enthusiastic, and... View Obituary & Service Information

The family of Mr. Dale V. Henderson created this Life Tributes page to make it easy to share your memories.

Send flowers to the Henderson family.