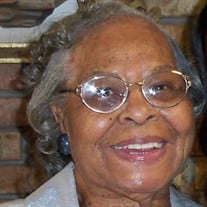 Dorothy Mae Evans was born on May 22, 1929 in Port Barre, Louisiana to Mary Andrews and Leonard Bob Fenelon. Dorothy accepted Christ our Lord early in life on June 26, 1929 at Sacred Heart of Jesus Church in Port Barre, Louisiana. She has since been a dedicated follower of the Catholic faith by attending Our Lady Star of the Sea Catholic Church in Fidelity, St. Katharine Drexel Roman Catholic Church in Hempstead, TX and Sacred Heart Catholic Church in Pattison, TX. Dorothy married Willie Porter on June 9, 1947 and then divorced in 1967. She then later entered into holy matrimony with Samuel Lee Evans who preceded her in death in 2015. At an early age, Dorothy relocated from Louisiana to Houston, Texas and in year 1980, she moved to the Pattison, Texas area where she resided for the remainder of her life. She received her nursing certification with Blalock East on November 17, 1981 and worked in the medical field until she decided to become a housewife. Some of her favorite hobbies were sewing, playing wisk and dominoes, listening to gospel music and sharing her life stories with others. She was preceded in death by both her parents, Mary and Leonard, siblings; Loise May Bracks, Pearlie May Harvey and Horace Lee Wilson; and daughter; Melba Jean Porter. Dorothy departed this life on July 10, 2016. She leaves behind a wonderful legacy of three children, Delores Chase (George), Coleman Porter (Vernette) and Gregory Porter (Senola); one brother, John Bernard; 7 grandchildren; a host of nieces, nephews and great grandchildren. She also leaves behind many friends of the family that had also known her as “Grandma”.

The family of Dorothy Mae Evans created this Life Tributes page to make it easy to share your memories.

Send flowers to the Evans family.