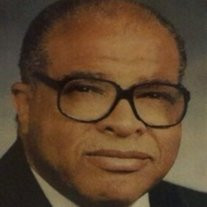 Hulen Mack Davis, Sr., a beloved Christian man, was quietly embraced by the Lord on Tuesday, October 22, 2013. He was 81 years old. Born March 23, 1932 in Waco, Texas to William Douglas Davis, Jr. and Mary Williams Davis, Hulen was the second of four sons. Hulen was preceded in death by his father (November 3, 1974), his mother (March 20, 2005), two brothers Bert and Marcus, and son-in-law, John E. Mack. He was baptized at a young age at New Hope Baptist Church in Waco, Texas. He was raised in Waco, Texas and educated in the McLennan County School system. He graduated from Moore High School in 1951 as valedictorian of his class. After graduating from high school, Hulen enlisted in the Navy and attended basic training at Naval Station Treasure Island, San Francisco, CA and the Naval Construction Battalion Center in Port Hueneme, CA. Hulen was trained to be a construction mechanic. He joined Naval Mobile Construction Battalion FIVE where he deployed to the Republic of the Philippines to help build Naval Air Station Cubi Point. After completing his assignment with the Navy, Hulen used the G.I. bill to enroll in Prairie View A&M College in 1953. Upon graduating from college, Hulen was commissioned as a Second Lieutenant in the Army. He attended basic training at Fort Benning, Georgia and served in the infantry. After serving in the Army, he began his career in education by teaching at high schools in Brenham and Port Arthur, Texas. While teaching at these schools, Hulen also coached and officiated football. Hulen continued his education at Prairie View A&M College, graduating with a Bachelor of Science in Political Science in 1957. Hulen continued his studies, completing a Master of Science Degree in Political Science from Prairie View. He pursued additional studies toward a doctorate degree. Hulen met the love of his life, Irene LaVerne Fry, while attending Prairie View A&M College, whom he married on January 22, 1956 and celebrated 57 wonderful years of marriage. To their union they had seven children: Glenda, Hulen Jr., Carla, Julie, Wanda, Bruce, and Gene. Family meant everything to him, he was on a constant quest to find and foster a relationship with all other family members. A devoted husband and father, Hulen mentioned several times that “My most important goal was providing a safe home and education for our children”. After relocating his family from Port Arthur, Hulen began a new phase of his career by becoming a professor of Political Science at Prairie View A&M College in 1963. In his 31 years on the faculty of Prairie View, he also served as the Interim Head of the Political Science Department and as the coordinator for the pre-law program. Hulen had a passion for teaching and he often encouraged his students to pursue advanced degrees. As a teacher Hulen touched the lives of many youth and helped them to become what God intended for them. While teaching at Prairie View he also sponsored several student organizations including the Political Science Club. He also was a faculty advisor for the Rho Theta Chapter of Omega Psi Phi Fraternity. Many teachers, lawyers, doctors, politicians and other career-oriented individuals are among the students whose path he crossed in his more than fifty years in education. Hulen was a long-time active member and supporter of St. Francis Assisi Episcopal Church in Prairie View, where he served in many capacities, including on the vestry and the men’s chorus, and lay reader, throughout the years. He was very proud to have all seven children complete college with six attending Prairie View A&M University. One son, Bruce attended the U.S. Naval Academy. Hulen mentioned several times “Life has been good to us and we thank God for the many blessings”. He was active in many Texas political organizations and activities, including the American Political Science Association, Southern Political Science Association, American Academy of Political Science, National Conference of Black Political Scientists, Southern Conference on Afro-Advisors, Texas Association of Pre-Law Advisors, Texas Association of College Teachers, and Southwestern Political Science Association. He was selected to participate in the inauguration of President Jimmy Carter in 1977 as a result of his efforts as the Waller County Coordinator. On several occasions throughout his career, he served as a delegate to the state Democratic Convention from Waller County. He was a charter member of the Coalition of Black Democrats of Texas. He participated in numerous Congressional Black Caucus Activities. He was also a published author on the subject of political science, having contributed articles to “Texas Politics Today”, a textbook used by major universities in Texas. In 1982, he served on the Transition Team for Governor Elect Mark White. He served on the Board of Directors for the Texas Guaranteed Student Loan Corporation from 1983 to 1989. In 1993 Hulen was appointed to the Brazos River Authority Board of Directors and served until 1999. While many knew about his passion for politics and his lengthy discussions on matters of importance in political systems within the nation, few may have known about his fun side. He loved Judo and got joy coaching the sport to students on the Prairie View campus. He was an avid roller skater, which he also taught to students on the Prairie View campus. He had a keen sense of humor and knew how to use humor to get his way, especially with his family. Each of his children has a list of Hulen-isms they talk about; many of which they credit with contributing to their being the people of integrity they are today. Hulen was recognized by the Prairie View A&M University Alumni Association in 2010 with the Alumni Lifetime Achievement Award, a honor he dearly treasured. Hulen departed on Tuesday, October 22, 2013. Family left to cherish Hulen’s memory are his loving wife Irene, four daughters and three sons: Glenda Davis Gregory (Terrence), Carla Davis White (Johnnie), Julie Davis Mack, Wanda Davis, Hulen Davis, Jr. (Pamela), Bruce Davis and Gene Davis (Keisha); one brother, Rev. Don Davis (Mary); four grandchildren; a host of nieces and nephews; and other relatives and friends.

The family of Mr. Hulen M. Davis Sr. created this Life Tributes page to make it easy to share your memories.

Send flowers to the Davis family.