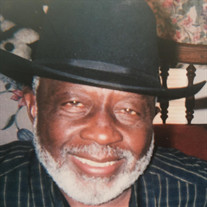 Jake Holland, Jr., 87, passed away quietly at home in Hempstead, Texas on Monday, May 20, 2019. On June 13, 1931 in Chappell Hill, Texas, Jake Holland, Jr. was the 14th and last child born to the late Jake and Elnora Holland. Jake Jr. accepted Christ at an early age and attended St. John AME Church in Sauney Stand. He later met and married Irene Crawford in 1950 and in this union of 32 years raised eight children. In 1971 he moved his family to Hempstead in their home which he built for them. He and his family attended Church of Christ then and to this day. Later in his years Jake fathered three more children. Jake Jr. was a master farmer, cattle rancher and carpenter, and built many homes in Waller and Washington counties. During his early years he worked construction and helped to build the 33 story Tenneco Bldg., in downtown Houston. He loved his community and mentored and employed many young men. He used his farming skills to create a yearly two acre vegetable garden for the community and for anyone who stopped by. At the appointed time Jake Jr. will be welcomed into heaven by Irene Holland; son, Bobby Long; parents, Jake and Elnora Holland and his 13 siblings. His love continues to be felt by his 11 children, Nelda Jackson and Willie, Alfred Dean Holland and Nadine, Adrienne Holland and Vincient, Shirley Hunt and John, Jake Holland, III and Debra, Joyce Hunt and Henry, Dr. Pamela Obiomon and Samuel, Johnny Holland and Faith, Jaylin Holland, Jonathan Holland and Ja’Terrian Holland, 16 grandchildren and a host of nieces and nephews. Jake Jr. knew the Lord for himself, which gives his family great joy.

The family of Jake Holland Jr. created this Life Tributes page to make it easy to share your memories.

Jake Holland, Jr., 87, passed away quietly at home in Hempstead,...

Send flowers to the Holland family.