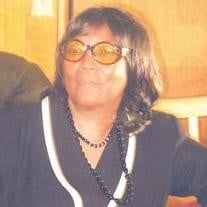 Joan Brown was born on August 6, 1947 in Hempstead, Texas. To Burton and Intha Watson. In 1965 she graduated from Sam Schwartz High School in Hempstead, Texas and attended Prairie View A&M University. After moving to Bryan, Texas, She married Tommie Sparks. From this union, they had two children, Telecia and Tommie Leon. She worked at City National Bank as a manager, Moore Business Forms in Quality Control, and Telephone Company as an operator in Bryan, she also was an Administrative Assistant at Prairie View. In more recent years, she worked tirelessly in the community as a private duty caregiver while leading others to Christ. She gave her life to Christ at an early age and joined Mt. Corinth Missionary Baptist Church. She accepted God’s call on her and became an Evangelist. Throughout the years, she was very active in various churches. In 1982, Joan returned to Hempstead where she later met and married Charles Brown of Prairie View. They were married for 25 years. She resided in Bryan until her death. Joan was a devoted wife and mother, sister, aunt, and friend. She was always ready to lend a helping hand and give encouraging words. In her spare time she enjoyed reading her Bible, fishing, camping, collecting rock specimens and watching her hummingbirds. She will be dearly missed. She was preceded in death by her mother Intha Watson, father, Burton Lang, son, Tommie Leon and sisters, Francis Johnson-Finch and Doris Jean Lang. Joan leaves cherish her memory: husband, Charles Brown of Prairie View, Texas; a devoted daughter, Telecia Sparks of Bryan, Texas; an aunt, Clara Smith; sisters, Carolyn Williams-White, Betty Jean Bennett, Bernice Gertman, Renee Stubblefield all of Hempstead, Texas; Ira Mae Jackson of Waller, Texas; Jessie Lee Scott of Prairie View; brothers, Burton Lang Jr.,Lee Ellis(Faye) Lang, Henry (Flora) Lang, Donell(Carolyn) Watson all of Hempstead, Texas; Wayne (Celeste)Watson of Houston, Texas. And a host of other relatives and friends. Telecia would like to extend a special note of gratitude to her Aunt Carolyn Williams-White for her dedicated care, love and devotion for her sister Joan.

Joan Brown was born on August 6, 1947 in Hempstead, Texas. To Burton and Intha Watson. In 1965 she graduated from Sam Schwartz High School in Hempstead, Texas and attended Prairie View A&M University. After moving to Bryan, Texas, She married... View Obituary & Service Information

The family of Mrs. Joan Marie Brown created this Life Tributes page to make it easy to share your memories.

Send flowers to the Brown family.