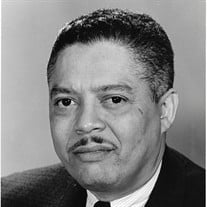 Dr. John H. Williams, Jr., departed this life on November 24, 2017. Born in Houston, Texas December 5, 1921 to John H. Williams, Sr. and Barbara Roquemore Williams, the first of three children, he was preceded in death by his father, mother and sisters, Ellie (Sue) Mathis and Dr. Hortense W. Dixon, his devoted wife, Thelma E. P. Williams, of 63 years, and his daughter, Johnetta O. Williams. He is survived by two daughters and one son, Barbara W. Pitts, Christal B. Pradia, John H. Williams, III, four grandsons, Lloyd, III, John, IV, Jason, Joseph, and one great-grandson, Jayden. He graduated from Hempstead Public Schools. He did his undergraduate work and his Master’s Degree at Prairie View A&M University, and began his professional career as a teacher and coach in Brookshire, Texas, and later became high school principal in Cameron, Texas. He entered the University of Maryland at College Park, Maryland during the summer of 1955 as the first minority in the graduate school to pursue his terminal degree (Ph.D.). He left Texas in 1958 to accept an appointment to the Washington, D.C. Unemployment Compensation Board, recommended by Senator Lyndon B. Johnson. He later worked with the Washington, D.C. public schools, serving as a teacher for delinquent children, a counselor and assistant principal. He did additional post-graduate study at D.C. Teachers College and George Washington University. He was requested by Attorney General Robert Kennedy to serve on a task force to do research at Bank Street College in New York, N.Y. on curriculum development for integrating schools. In 1967, he left the public schools to enter the Federal Government as the first Employment Policy Officer for Federal Housing Administration developing employment policies for hiring minorities. After a merger of FHA and Housing and Urban Development, he became Deputy Director of Special Personnel Programs at HUD, until asked to go to Indiana and assist in organizing the HUD Indiana State Area Office as the first Director of Administration. During this time, he served on a White House assignment by President Lyndon Johnson to develop recruitment policy for minority college graduates to enter Federal Service. He served on the Parade Review Committee for the inauguration of President Jimmy Carter and President J.F. Kennedy’s Committee for Prevention of Juvenile Delinquency, and was listed in Who’s Who in government. During his tour of duty in Indiana, he was awarded his terminal degree at the University of Indiana. He remained in Indiana for three years, and returned to the staff of Assistant Secretary for Fair Housing and Equal Opportunity as a Fair Housing Examiner until retirement. He returned to his native state of Texas in 1980 and became involved in investigation of abused and neglected children. In 1981, he began the development of the first juvenile program in Waller County, Texas which was started with one person and a budget of $15,756 and grew to a staff of 16 and a budget of near $300,000, as Director of that program. Later, he retired to become President of Williams and Williams Consultant firm. He has been active in the Urban League, N.A.A.C.P. and served on the statewide select committee to remove children from adult jails in Texas for the Texas Juvenile Probation Commission. He is a Phi Beta Kappa, a member of the American Society for Public Administration and the National Citizen Participation Council. He is a veteran of WWII, a member and past chairman of the Criminal Justice Advisory Board for G.G.A.C. and severed as Vice Chairman for the Statewide Advisory Board for Texas Commission for Alcohol and Drug Abuse. He also served as a member of the University Teachers Center Educational Council at Prairie View A&M University and member of the Local Board of the Selective Service Board for the Texas Region IV for four years.

The family of Dr. John H. Williams Jr. created this Life Tributes page to make it easy to share your memories.

Send flowers to the Williams family.