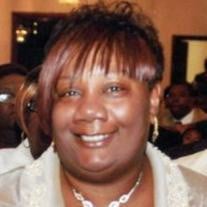 On January 2,1971 a beautiful baby girl was born in Hempstead, TX to Ms. Allien Vivian Powell and Mr. Tommie Lee Emerson whom they named Lashonda Wynette Powell. She was the second of four children,two boys and two girls. She grew up in Brookshire Tx and attended Royal Elementary and Royal High School. She was a member of St. Paul Baptist Church and was baptized under the leadership of Pastor AJ Williams and remained a member under the leadership of Pastor Lee Jones Jr until her departure. In May of 1988 she was blessed with her first daughter Ms. Courtney Denae Powell (Frederick) who was a inspiration to her mother,after growing up and moving to the waller area they formed a close relationship like sisters. She was very proud of her daughter being the first to attend and graduate from Prairie View A&M University. On January 24,1994 she was blessed with her second daughter Ms. Antoinette Lashon Wilder who graduated this year June,2012 with her mother being sick and not able to attend her graduation and she is now on her way to Prairie View A&M University. December 4,2001 she was blessed with her only son whom they named Nathaniel Jerome Crawford Jr. She was united in holy matrimony to Mr. Nathaniel Crawford Sr. whom she loved dearly and he loved her. The two shared a bond together, through this another daughter was added to the family whom she loved as her own Ms. Jossalynn Crawford. She was a long time employee of The Oaks Brookshire she also worked for Krause Treatment Center in Katy,TX,Grace Care and Cane Island Nursing Center where she was employed until her time of sickness. She came in contact with many people that loved her. Shonda loved working with the elderly. She would drive the miles to care for her mom until she became ill herself. After being ill for some time, in the afternoon of June 29, 2012 God looked at the role and saw that her job down here was complete so her called her name and she answered the call. She leaves to cherish her memories a loving and devoted husband Mr. Nathaniel Crawford Sr,Mother Ms. Allien Vivian Powell,Father Mr. Tommie Lee Emerson,Daughters Courtney Powell (Fredrick) Antoinette Wilder,Jossalynn Crawford Son Nathaniel Crawford Jr,Sisters Leandrea (Lee),Mary Muse,Cora B (Lavagas), Alice,Annie,Odessa, and Lisa. Sister in law Carrita Shauntae Evans (Aric). Brothers Gerald Powell (Brenda), Julian Powell, Darryl,Andy, Charles,Winston, Emerson. Two special aunts of Brookshire texas Versa Powell and Jo Ann Powell (Holmes. One aunt of Houston, TX Aunt Nelli Ray Ware. A special friend of many years Ms. Monessa Whitaker of Katy,TX. One God child Jayden. And a host of nieces, nephews, relatives, and friends.

On January 2,1971 a beautiful baby girl was born in Hempstead, TX to Ms. Allien Vivian Powell and Mr. Tommie Lee Emerson whom they named Lashonda Wynette Powell. She was the second of four children,two boys and two girls. She grew up in Brookshire... View Obituary & Service Information

The family of Mrs. Lashonda W. Crawford created this Life Tributes page to make it easy to share your memories.

Send flowers to the Crawford family.