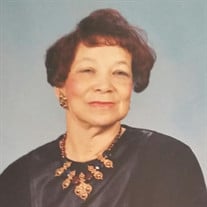 Mae Helene Wilson James (August 2, 1933 to August 6, 2015) Mae Helen (Wilson) James born August 2, 1933, daughter of Jessie M Wilson Sr. and Helen (Babe) Grant Wilson. She was born into a family of teachers at Prairie View A&M University, Prairie View, Texas and died on August 6, 2015. Her father Jessie M Wilson was an Industrial Arts Tailoring Professor. Her mother Helen Grant Wilson taught at the University in addition to doing private piano lessons. Mae was quickly discovered to possess a beautiful coloratura soprano voice which was adapted to light classical songs, and she was soon called upon to perform locally in the Prairie View community. Upon graduating from High School she was awarded a full music scholarship to Howard University in Washington D.C. where she earned a Bachelor’s Degree in 1956, while singing in the renowned Howard University Choir. She earned her Master’s degree in Music from Prairie View in 1957. She shared her inspirational voice performing at church functions and special community events throughout her life. Her voice is recalled by many as piercingly clear, opera like, beautiful, yet powerful. She taught music in high schools for several years in the Johnson City-Binghamton, New York area and Waller-Prairie View Texas area before retiring. Her contributions to Prairie View were many to include; Secretary for the city of Prairie View, secretary to the Dean of Women, Dormitory Director for the Honor Dorm L.O. Evans, as well as other dorms on campus. She was the music director, lead vocalist and pianist for St. Martin De Pores Catholic Church in Prairie View, and a member of the St. Katharine Drexel Parish Choir. Mae is survived by her brother Jesse M. Wilson Jr. of Austin Texas, and her four children: Everett Michael James of Prairie View Texas; Suzanne K. James Donovan (Lionel) of Lithonia, Georgia; Kevin T. James (Marcia), of Corona, California; and Shawn D. James (Tina) of Towanda, Pennsylvania. Mae Helen has eight grandchildren. Mae Helen Wilson James will be laid to rest at The Evergreen cemetery Austin, Texas. She will rest alongside her Mother Helen (Babe) Grant Wilson.

The family of Mrs. Mae Helen Wilson James created this Life Tributes page to make it easy to share your memories.