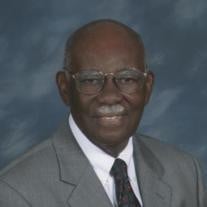 Henry passed away Monday, June 4, 2012 in Houston. Visitation will be held from 5 p.m. to 8 p.m. Friday at the William “Billy” J. Nicks, Sr. Building at PVAMU. A rosary will be held at 6 p.m. followed by the Knight of Columbus at 6:30 p.m. An Omega Psi Phi memorial service will be held at 7 p.m. Visitation will continue at 10 a.m. Saturday until the time of service at 11 a.m. in the Nicks Building. Interment will follow in the Prairie View Memorial Cemetery. A native of Dallas, Texas, Henry served PVAMU in many capacities since joining the staff in 1956. He was Director of the Learning Resource Center; head of the department of curriculum and foundation and head of the department of educational media and technology. In 2011, he was selected as a member of the inaugural class of the Chancellor’s Academy of Teacher Educators, a Texas A&M University System initiative acknowledging teaching excellence. Henry was the former director of athletics and was an active supporter of PVAMU sports. He was also public announcer for track and field events, chief clerk of the course, chief finish judge and a member of the Prairie View Sports Official Association. While Henry’s influence in the Whitlowe R. Green College of Education is clear, his impact has been felt by every student crossing the stage at graduation as a major figure in the commencement exercises. He served as Chairman of the Commencement Committee for more than 50 years, even serving as the Commencement Marshall for nearly three decades. Last year, Henry told 1876 magazine one of his greatest honors was assisting with the development of the University Mace, Medallion and Podium in 1983. In 1995, Henry was honored with a street bearing his name. Marion Henry Drive runs alongside the famed William “Billy” J. Nicks, Sr. Fieldhouse and leads to the university’s stadium, Blackshear Field. Henry earned his bachelor’s degree from Southern University and A&M College. He completed his master’s at Bradley University and earned a Ph.D. from Syracuse University. Among his numerous memberships in many organizations, Henry was a proud member of Omega Psi Phi Fraternity, Inc. for 62 years Final arrangments entrusted to the Professionals at Singleton and Sons Funeral Home Inc. of Hempstead, Texas (www.singletonandsonsfh.com)

The family of Dr. Marion Henry created this Life Tributes page to make it easy to share your memories.

Send flowers to the Henry family.