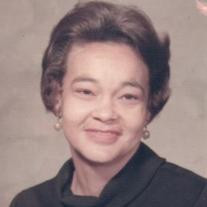 Mary Belle Kemp, 79, passed quietly into eternity on Sunday, May 29, 2011 from complications caused by a stroke. This condition also triggered Alzheimer’s disease which she dealt with for the past five years. Mary Belle was the third daughter of five born to Elwood and Ida Brown on June 3, 1931 in Frankfort, Kentucky. Sisters June Locke and Joyce Stith are residents of South Bend, Indiana. Maxine Hannibal resides in Atlanta, Georgia, and Ida Marie Woodard calls Hopkinsville, Kentucky home. Ida Marie and her daughter Carissa lived with the Kemp’s for a short period of time. Step brother, Charles Williams of Lexington, Kentucky, Dorsey Brown of Ypsilanti, Michigan, and James Brown of Los Angeles, California preceded Mary Belle in death. Sister-in-laws Mary Jane Brown and family live in Lexington, Kentucky, Clara Brown and family in the Ypsilanti, Michigan area. Mary Belle was educated in the schools of Frankfort: The Rosenwald Training School, Mayo Underwood Middle and High School, and Kentucky State College. In 1947 she met Henry P. Kemp, a new teacher in town, and on March 4, 1950, they married in Jeffersonville, Indiana. From this union came Henry P. Kemp, Jr., deceased, Teresa Renae, and Darryl Ray, all born in Frankfort. In 1960, the family moved to Prairie View, Texas where Henry P. Kemp, Sr. took employment as an instructor in drafting and building construction in the School of Industrial Education at Prairie View College. Moving to Prairie View was exciting to all, especially Henry, for it was a continuation of his teaching and working in home building, but on a much larger scale. The children immediately enrolled in the Prairie View Training School and soon after, Mary Belle was hired as the school’s secretary. From this point she performed faithfully and efficiently and later moved to Waller High School where she was employed in several positions for thirty-five years, retiring in 1995. Mary was a busy worker, mostly with children, and spent time with scouting, teenagers, and Mt. Corinth Baptist Church’s children’s programs. She also taught Sunday and Vacation Bible school and was active with the Women’s Auxiliary. She also found time to participate in community activities and was often heard loud and clear at public meetings. The family’s standard summer activity, for many years, was those long, fun-filled, car rides to visit relatives in Virginia, Indiana, Michigan, and Kentucky. Those rest stop picnics along with family reunions will never be forgotten. Mary Belle is survived by Henry P. Kemp, her husband of 61 years, son Darryl Kemp, and daughter Teresa Nickleberry with granddaughters Traci and Andrea. She is also survived by her sisters June, Joyce, Maxine, Ida Marie, sister-in-laws Clara and Mary Jane, and a host of nieces, nephews, cousins, and friends, who will miss her dearly.

Mary Belle Kemp, 79, passed quietly into eternity on Sunday, May 29, 2011 from complications caused by a stroke. This condition also triggered Alzheimer’s disease which she dealt with for the past five years. Mary Belle was the third daughter... View Obituary & Service Information

The family of Mary Belle Kemp created this Life Tributes page to make it easy to share your memories.

Send flowers to the Kemp family.