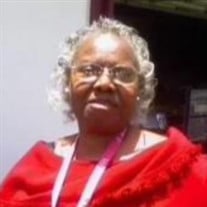 Mary Ethel Fry Moore was born at the Prairie View College Hospital in Prairie View, Texas on March 3, 1931 to Francis G. Fry, Sr. and Ethel Phillips Fry. She was born again August 17, 1978 (she wrote it in all her bibles). She was the first of four children born to this union. She attended Prairie View Training School on the campus, and graduated from Prairie View A&M College (now Prairie View A&M University) in 1951 with a Bachelor of Arts degree in Music. She taught Choir and Typing for a brief period in China, Texas. She worked on the campus, in the laundry, as a telephone operator, and for 33 years in the Data Processing, retiring as Supervisor in 1983. She then worked for the City of Prairie View as Municipal Court Clerk for ten years. She was born, raised, and lived all of her adult life in Prairie View, only leaving in 2016 to northwest Houston. She met Christ at an early age, and was a lifetime active member and faithful supporter of Mount Corinth Baptist Church in Hempstead, Texas where she continued to attend until physically unable. Even then, she would occasionally drive to the church and sit in her car during the service because she just wanted to be there. She was always delighted to hear, or receive a visit from her Pastor and First Lady. During the CB Era, anyone traveling Highway 290 knew the Golden Lady. She kept her CB radio on at home 24/7, and would wake up when she heard someone call her handle, much to the chagrin of her family when it would completely wipe out the television channel when she keyed the mic! She dearly loved and prayed without ceasing, for her family and friends. God hears all his children, but there is no doubt she had a priority line to the Master! I believe He gave her all the time she desired here on earth. Her standard answer to a how are you doing inquiry was “Blessed!” Mary enjoyed her life to the fullest. She enjoyed traveling and found a road buddy in Evelyn Moore (Nanny). They would travel across the state and across the country to attend church conferences, events and services. Mary was preceded in death by her parents and one brother, Francis G. Fry, Jr. (Dayton, OH) and one sister, Eleanor Jean Bryant (San Diego, CA); and husbands, Charlie Davis, Jr., Ernest Johnson, Jr. and Lee H. Moore. She is survived by one sister, Irene Fry Davis of Katy, TX; her children, Ruby Davis-Ajala (Wendall) of Bryan, Texas; Charles Davis (Sandra) of Houston, Texas; and Gary Johnson (Frankie) of Prairie View, Texas: grandchildren, Theiopolas Davis, Derrick Davis, Charles Davis, Jr., Karen Lane Davis, LaKiesha Davis, Sam Carpenter, David Hooper, and Nicole Johnson, ten great- grandchildren, and one great-great-grandchild; former husband Daniel Kirkwood of Colmesneil, TX; and a host of nieces, nephews, and friends.

Mary Ethel Fry Moore was born at the Prairie View College Hospital in Prairie View, Texas on March 3, 1931 to Francis G. Fry, Sr. and Ethel Phillips Fry. She was born again August 17, 1978 (she wrote it in all her bibles). She was the first... View Obituary & Service Information

Send flowers to the Moore family.