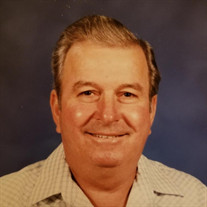 Milton Peters was born on January 3, 1939 in Old Washington, Texas to Meta and Otto Peters. Milton was a long-time member of Frieden’s Church in Old Washington. Milton had two brothers and three sisters. Milton had one son, Milton Duane Peters, with Marie Webb. Milton was married to Lily Laverda Watkins for 40+ years until her passing. Milton loved to work and did HVAC work for 40+ years and 26 of those years were with Houston ISD. Not only was he a hard worker, but he had many passions in life. Some of these passions and hobbies included fishing, hunting, dancing, gardening and spending time with family. He was also known for his love of barbequing and his Coors Light. Milton was featured in the Navasota paper for catching a 43lb yellow catfish out of the Brazos River on a throwline and this is a story he loved to share with everyone. Milton is preceded in death by his father and mother, Otto and Meta Peters, wife Lily Laverda Peters, sisters Mona, Adelle and Millie, stepson Jimmy Olson, and nephew Gilbert Ray Druckhammer. Milton is survived by his son Milton Duane Peters and wife Teresa, brothers Ottis Peters and Otto Peters Jr, stepsons Jerry and Johnie Olson, grandsons Phillip Olson and Jerry Olson Jr, granddaughters Jessica Johnson, Kellye Maier, Kristle Peters, Amber Peters Lang, 10 great grandchildren, 2 great great grandchildren and many more beloved family members and friends. One close family friend who has been there through it all and must be mentioned, Patricia Renn.

The family of Milton Peters created this Life Tributes page to make it easy to share your memories.

Send flowers to the Peters family.