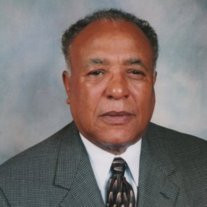 Milton Gerald Whiting was born July 10, 1933 to the late Mary Jewel Mabel and Waymon W. Whiting in Old Washington, Texas. Milton graduated from Pickard High School in Brenham, TX and he matriculated at Prairie View A&M University where he earned a Bachelor of Science and a Masters degree in Agriculture. After graduation, Milton was commissioned as a Second Lt. in the US Army Infantry Division. Later Milton received additional certification in Finance. He began his career as a Waller County Extension Agent and joined the ranks of Farmers Home Administration (FHA), U. S. Department of Agriculture. Milton was noted for his financial expertise. He believed in fiscal responsibility and dedicated his life to sharing his gift with his family, church and community. After 34 years of distinguished service, Milton retired from FHA as Assistant District Supervisor. Milton’s career did not stop there. Did you know that Milton was a high school basketball game referee for many years? He saw a need and had a desire to help in his community so he made the decision to run for public office. Milton was elected Waller County Commissioner in 2000 and held that position for two terms until 2008. Due to Milton’s financial background and ability to get things done, he was chosen to serve on many boards: Vice President San Bernard Electric Corp, Southeast Texas Realtors Board, Waller County Crime Watchers Board and also Chair of the Waller County Appraisal Board for two terms. Throughout his professional career of more than fifty years of service, Milton was often reminded of his high school class motto “STAND FOR SOMETHING OR YOU WILL FALL FOR ANYTHING”; THESE PRINCIPLES GUIDED Milton throughout his life. Many local communities were aided by his expertise when they needed assistance in locating financing for fire stations, water systems and single and multiple family homes. He assisted thousands of young families to get funding during his career. After many years, Milton moved his membership from Mt. Corinth Baptist Church. Since that time he has been an active member of Bethlehem United Methodist Church for over 20 years where he was currently serving this past year as Chair of the Trustee Board. Milton was also a Life member of the Prairie View A&M University Local and National Alumni Association, PVAMU Class of 1953 Alumni Chapter and a member of Omega Psi Phi Fraternity. He was a member of the Prairie View Retired Teachers Association. Milton leaves to cherish his memory, his devoted wife, Jocelyn, his brothers, Waymon Whiting Jr., Curtis Whiting (Sheila), sister, Dorothy Mangram (Dickie) and a host of nieces, nephews, relatives and friends. In lieu of flowers, contributions can be made to Bethlehem United Methodist Church Remodeling Fund, P. O. Box 848, Hempstead, Texas.

The family of Mr. Milton Whiting created this Life Tributes page to make it easy to share your memories.

Send flowers to the Whiting family.