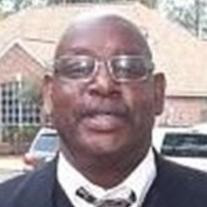 Mitchell Ragston, Jr., beloved and devoted husband, son, brother, father and grandfather passed away on February 21, 2011. He was born to Golden and Mitchell Ragston, Sr., at the Houston Negro Hospital on June 13, 1952 in Houston, Texas. He was affectionately known as“Chuck” to his friends and family. He attended and graduated from Susan Miller Dorsey High School in Los Angeles, California, where he excelled as a student and an articulate speaker. After completing his high school education, he attended California State University at Los Angeles for one year before volunteering to enlist in the United States Air Force in 1972. After being stationed close to home in Riverside, California, he was sent to Bangkok, Thailand, where he served his country during the Vietnam War for 2 ½ years. It was during this period of service that he met the love of his life, Laiad Hong Thong. They married in Bangkok, Thailand, on October 8, 1975, and returned soon after to Los Angeles and was Honorably Discharged from the Air Force in 1977. From this union they shared three children by birth and three from marriage which has yielded a total of 12 beautiful grandchildren. In 1989, he established his family in the small suburban city of Missouri City, Texas, outside of Houston. There, he became the “adopted” father to several of the neighborhood children through love and compassion and was known as “Pop” to those he has guided into adulthood. He touched the lives of everyone who knew him. His passion for “the Motown Sound” music was legendary among family and friends. In this world of existence, he was preceded in death by his mother, Golden; and survived by his loving father, Mitchell Ragston, Sr., his devoted wife, Laiad; two sisters, Aurore and Dierdre Ragston, his sons, Mitchell III (Olivia), David Kamil (Eve) and his daughter, Jailani (Adriace Lofton); an “adopted” son, Louis Patterson (Silvia), 12 grandchildren; and countless other relatives and friends who dearly loved him and whom he cherished.

Mitchell Ragston, Jr., beloved and devoted husband, son, brother, father and grandfather passed away on February 21, 2011. He was born to Golden and Mitchell Ragston, Sr., at the Houston Negro Hospital on June 13, 1952 in Houston, Texas. He... View Obituary & Service Information

The family of Mitchell Ragston Jr created this Life Tributes page to make it easy to share your memories.

Send flowers to the Ragston family.