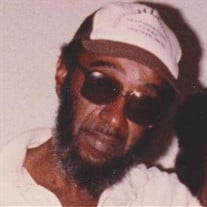 OZ Taylor Sr. was born to the late Doc Taylor and Edna Lee Phillips-Taylor on June 19, 1934 in Hempstead, Texas. He was raised by his uncle the late A. L. Taylor, an agricultural professor at Sam Schwarz High School and the late Dallas Taylor.... View Obituary & Service Information

The family of Mr. O Z "Dick" Taylor created this Life Tributes page to make it easy to share your memories.

Send flowers to the Taylor family.