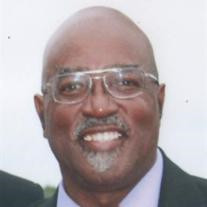 Oran Alton Lilly, Jr. the oldest of 10 children was born in Hempstead, TX to the late Rev. Oran Alton and Minnie Lilly. Oran accepted Jesus Christ as his personal Savior at the age 6 in the Mt. Corinth Baptist Church, Hempstead. His education began at Sam Schwartz School in Hempstead, Texas. While in high school he fell in love with and later married Bernadine Tompkins, and to this union four beautiful children was born. He earned a Bachelor of Science Degree in Agriculture from Prairie View A & M University, Prairie View Texas and a Master of Science Degree from American University in Washington D.C. His began his career with the Farmers Home Administration in Iowa in 1965 and retired in 1995. He serviced his country in the U. S. Army, including a tour of duty in Viet Nam and he was honorably discharged in 1968. He followed his mother’s advice to lead the way for his siblings and was always a good role model for them. He always said, “If I fail my sisters and brothers will also”. He has always worked for the Lord in his church and community. During the early evening hours of July 31, 2012 the Lord tenderly lifted him up out of his earthly slumber and took him home to be with Him, where he will be reunited with his parents and his sister Alma Vivian Irving. Cherishing his memory are his sons Oran Alton Lilly, III, (Sandy) Gold Canyon, AZ, Ceko Lilly, (Rachel) Des Moines IA and his daughters, Marcey M. Ruiz, Hempstead TX and Karla A.D. Lilly, Ottumwa, IA. He will be terribly missed by his grandchildren: Joey, Mahaila, Kennady, Karlos, Kalani, Kaylee, Kristiana, Karsen, Kiernan, Jensen, Kyia, Jordan, Stephan and J.T. Brothers: Rev. Edward Lilly (Annette), Rev. Kenneth Lilly, Chester Lilly (Pam). Sisters: Rosa Grant, Doris Thomas, Brenelsa Tiburcio, Korotha Lambright (Leroy), Urwanda Weathersby (Ric). He will also be missed by his special friend Norma Sanchez and host of nieces, nephews, other loving relatives and friends.

Oran Alton Lilly, Jr. the oldest of 10 children was born in Hempstead, TX to the late Rev. Oran Alton and Minnie Lilly. Oran accepted Jesus Christ as his personal Savior at the age 6 in the Mt. Corinth Baptist Church, Hempstead. His education... View Obituary & Service Information

The family of Mr Oran Alton Lilly Jr created this Life Tributes page to make it easy to share your memories.

Oran Alton Lilly, Jr. the oldest of 10 children was born in Hempstead,...

Send flowers to the Lilly family.