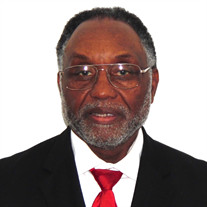 Robert L. Wallace, Jr. was born on August 27, 1943 in Wallis, Texas, to Robert and Ollie Wallace, Sr. He went to be with his Heavenly Father on Wednesday, October 18, 2017. Robert attended Macedonia Public Schools in Sealy, Texas, Union Center Elementary School in Raccoon Bend and graduated from Austin County High School in 1962. He was a member of the American Legion, Post 979 in Hempstead. Robert enlisted in the U.S. Army in 1962 and was stationed in Germany. He was honorably discharged in 1968. He was employed by Daniel Valve Company and retired after 40 years then worked for five years at Hempstead Independent School District until he took ill. Robert L. Wallace, Jr. married Ora Hill and they have been married for 15 wonderful years. Robert later gave his life to Christ and was baptized in September of 2011 at the Greater 1st Missionary Baptist Church in Anderson, Texas. It was a glorious and momentous occasion where he was surrounded by family and friends. He was very proud of this accomplishment in his life. He was ordained as a Deacon on July 3, 2016, at the Morning Star Missionary Baptist Church in Bryan, Texas. Robert is preceded in death by his parents, Robert and Ollie Wallace and his brother, Ira, Sr. He leaves to cherish his memory, his loving and devoted wife Ora, his daughter, Jacqueline and son Rodney, his; seven step-children, Anthony (Sheila), Dalphana (Nathaniel), Catherine, Jullette (Mark), Timothy, Juanita (Ronnie), and Rosita (Wayne); three sisters, Bertha, Irene and Lorene; two brother, Lorenzo, Sr. and Edward; 25 grandchildren, and a host of nieces, nephews, relatives and friends. Robert loved Jesus Christ, his family, he loved his church, and he loved his Dallas Cowboys!!!

The family of Robert Lee Wallace Jr. created this Life Tributes page to make it easy to share your memories.

Send flowers to the Wallace family.