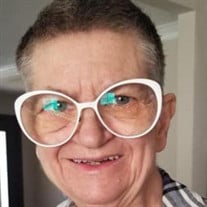 Bobbi Yeager was born Roberta Anne Yeager on July 5th, 1954, in Princeton, Indiana to Pauline & Loren Yeager. At the age of 14, Bobbi suffered from a gunshot wound rendering her disabilities of the mind but not of the heart; she never met a stranger and loved everyone without measure. Bobbi had the purest heart, to know her was to love her. Bobbi had been ill and suffered from liver disease; she passed away on Sunday, February 6, 2022, at home in Cypress, Texas surrounded by her loved ones. Bobbi lived with her niece and caregivers, Zina (Davis) and Victor Brown, and great-nephew Shaun Brown. Bobbi lived her best life mixing and mingling at the West Gray Community Center in art, exercise, line dancing, and jewelry class. Bobbi was very competitive and loved to play cards with her Bridge Group, and Uno. She enjoyed competing in Bocce Ball. She was affectionally known to many as Ms. Roberta and Ms. Birdie because she fluttered around helping all she could. Bobbi was a volunteer to anyone in need and was a long-term member of the We Are People Too Choir, VIL, and Blind Buddies. She was there to assist anyone who needed her. Bobbi loved attending events at the Miller Outdoor Theater. Bobbi’s very favorite foods, which she enjoyed endlessly were snacks, Ham, BBQ Ribs, Cole Slaw, and Baked Beans. Bobbi was proceeded in death by her cat Popo, her father Loren Yeager, and Mother, Pauline Shuler, sister, Beverly Hart. Aunt Paulette Baker, and Uncles Leon and Leland Montgomery. To carry on and cherish her memory are sisters Janet Bretz of Houston, TX and Sharon Bowling of Vicksburg, MS. Caregiver/Niece: Zina & Victor Brown. Niece, Jamie Bretz (great-nephews Tyler, Levi, and Caleb) of Pukekohe, New Zealand, Dinielle Palmero of Gulfport, MS; Tammy Hart of Evansville, IN, and Angela Smith of Miami, Florida. Nephew: Loren miller of Houston, TX, and a host of great-nieces, nephews, and cousins. Bobbi was especially close to her great-great nieces Renia and Riley Brown, and Rishel Lutzi. Bobbi will be sorely missed by her many special friends of West Gray. Brother-in-law Haskell and Robin Davis of Long Beach, MS, and fur friends Bison, Baileys, Captain, Perl, and Cody. She attended Resurrection Metropolitan Community Church. The family would like to thank Nurse Sharon Blomberg, neighbor and friend, for the special love she gave Bobbi in her final days. Thank you all for loving her, as much as we did. SERVICES: Bobbi will be returned home to Indiana where she will be buried next to her mother. Visitation will be at Stodghill Funeral home in Ft. Branch, IN with graveside services and burial at Walnut Hill Cemetery in Ft. Branch, Indiana. A Celebration of Life will be held at the Metropolitan Multi-Services Center at 475 W Gray St, Houston, TX 77019 on February 18th from 11am - 1:00 pm.

Bobbi Yeager was born Roberta Anne Yeager on July 5th, 1954, in Princeton, Indiana to Pauline & Loren Yeager. At the age of 14, Bobbi suffered from a gunshot wound rendering her disabilities of the mind but not of the heart; she never met a... View Obituary & Service Information

The family of Roberta "Bobbie" Yeager created this Life Tributes page to make it easy to share your memories.

Send flowers to the Yeager family.