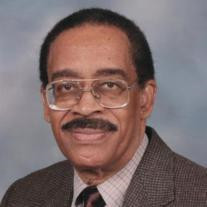 Mr. Ulysses Rudolph Bell, affectionately known as Rudy, entered into eternal rest on Good Friday, April 22, 2011 in his home after a lengthy illness. Mr. Bell was born on Christmas Day, December 25, 1930 in Dallas, Texas to Mr. and Mrs. Dewitt and Nina Bell. He was the fourth of five children born to this union. Ulysses graduated as valedictorian in 1948 from Booker T. Washington High School, Dallas, Texas. He continued his educational success at Lincoln University, Jefferson City, Missouri where he graduated Cum Laude in 1957 with a Bachelor of Science degree in Business Administration accompanied by a double minor in Economics and Mathematics. Pledging in 1949, Rudy became a life member of Alpha Phi Alpha Fraternity, Inc. Mr. Bell served in the United States Army ( ). In 1964, Mr. Bell moved to Prairie View, Texas as an Assistant Accountant for Prairie View A&M University. His professional career ascended to Associate Vice President of Fiscal Affairs . He officially retired from the university in 1984. Not quite ready to settle in, Mr. Bell then worked as the Business Manager for the City of Prairie View until he fully retired in 1992. Mr. Bell believed in our Lord and savior Jesus Christ. He connected with Bethlehem United Methodist Church in Hempstead, Texas soon after he came to Prairie View. Over many years, he supported them with his fiscal talent, his time, his voice and his undying commitment. Early in his Prairie View career, Rudy became acquainted with and married the love of his life, Miss Ruby Jean Green. Their union was blessed with three loving children. Rudy was preceded in death by his wife of 40 years, his parents, his sisters: Ruby Hillary and Vern Bell, and his brothers: Dewitt Bell, Jr. and Claude Bell. Mr.Ulysses Bell leaves to cherish his memory his sons John Bell (Wivory) of Aliso Viejo, California and Mark Bell of Prairie View, Texas, and his daughter Nicole Bolar (Douglas) of Houston, Texas. He also leaves his beloved grandchildren: Sean, Peri, Chandler and Chelsea. His memory will also be treasured by his in-laws Emma Faye Bell, Jerry and Denita Green, Claudia Green Baker, and Louis Green as well as a host of nieces, nephews and friends.

The family of Ulysses R. Bell created this Life Tributes page to make it easy to share your memories.

Send flowers to the Bell family.