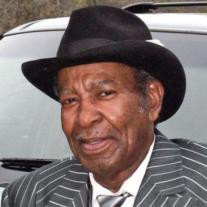 Rev. Wesley Wilson, Jr. was born July 9, 1938 in Hempstead, Texas to Annie Mae Simmons and Wesley Wilson, Sr. He attended the Bob Burton Community School in Sunnyside, Texas and later on moved to Hempstead, Texas to finish high school. Upon his graduation, Wesley moved to Houston, Texas where he resided for over 50 years. He loved the Lord and at an early age confessed hope in Christ by uniting with the Progressive Missionary Baptist Church in Hempstead, Texas and he later joined the Louisville Missionary Baptist Church under the leadership of Rev. Sidney Trahan. Wesley united in holy matrimony with Barbara Rae Hill in 1960 and for 42 years they enjoyed love and happiness until her death. This union was blessed with 7 beautiful children. Wesley served as an Usher, Sunday School Teacher and Deacon at the Louisville Missionary Baptist Church before receiving his call to the ministry in 1980. Soon after, he was asked to serve as the Pastor of the Sweet Home Missionary Baptist Church in Somerville, Texas. He was a faithful pastor of Sweet Home for 24 years until his retirement in 2006. While serving as the pastor of Sweet Home, he was called to serve as the pastor the Louisville Missionary Baptist Church of which he did for 31 years. He was a faithful pastor and servant of Louisville until his demise. He loved working on big trucks and served as a Front-end Specialist for over 42 years. Wesley was employed by the Pruitt Company in Houston, Texas for 20 years and later gained employment at Goodyear Tire Company where he worked for 20 plus years. He enjoyed his trade and was an exceptional employee until his retirement in 2004. Wesley is preceded in death by his wife, Barbara Wilson; mother, Annie Mae Wilson; father, Wesley Wilson, Sr.; one brother, Leonard Jordan (LG); and one sister, Gloria Bishop. He is also preceded in death by one special cousin, Leonard Jordan (Leaky). He leaves to cherish his precious memories his children: Stephanye Andrews (Earl), Etta Walker (Will), Wesley Wilson, III (Elouise), Larry Wilson, Sr. (Blynthia), Valencia Tompkins (Anthony), Otis Wilson, Cola Wilson, Evelyn Santee, Eunice Stean Manuel, Thayla Edmond (Larry), and Darryl Jackson; one sister, Mary Simpson (Ricky); a loving mother-in-law, Bernice Vanduren; a special friend, Vera Santee; God-daughter, Rose Tucker-Brown, 32 grandchildren, and a host of great-grandchildren, nephews, nieces, other relatives and friends.

The family of Reverand Wesley Wilson Jr. created this Life Tributes page to make it easy to share your memories.

Send flowers to the Wilson family.