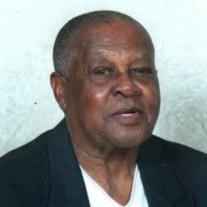 Willie James Bell, Jr. was born on August 9, 1924 in Smithville, Texas. He was the only child born to Willie James Bell, Sr. and Fannie Bryant Bell. Upon graduating from Smithville High School, he entered the U.S. Army in 1943. After serving in the U.S. Army, he attended Prairie View A&M College where he obtained a Bachelor and Master degree(s). After college, his first job was with Forward Times Newspaper in Houston, Texas as a printer. He began his career with Prairie View A&M in 1947 as an instructor and later became the Head of the Printing Department. Willie retired in 1985 after thirty-eight years of dedicated service to the University. On March 20, 1948, Willie met and married his college sweetheart, Esel Davis of Conroe, Texas. To their sixty-three years union there were (4) children: Chandra Marie, Felecia Denise, Willie James and Esel Andrea. He was a loving husband, father and grandfather. He had a strong devotion for his family and cherished every moment spent with them. He was very proud of his children, grandchildren and great grandchildren. With a charming personality and a kind heart, he had the ability to make friends with people everywhere. His great appreciation for food was expressed quite often as he prepared delicious meals for family and friends alike. Willie was very dedicated to his church, Mt. Corinth Baptist Church and to the Prairie View community. He was very active with Phi Beta Sigma Fraternity, Inc. He was a member for fifty-one years and positively affected the lives of many Sigmas at Prairie View A&M. He was also a member of the Prairie View Alumni Association and Athletic Club and a member of the Mason’s (Prince Hall Affiliated). Willie was preceded by his parents Willie James Bell, Sr. and Fannie Bryan Bell. He leaves to cherish his memories his loving wife; Esel Bell, his children; Chandra Johnson, Felecia Compton (Wayne), Willie J. Bell, III (Collis) and Esel Andrea Miller. Grandchildren; Demetria, Charles Jr., Scheherazade, Schelita, Candice, Willie IV, Gary Jr. and Matthew. Great grandchildren; Brooklyn, Braylon, KeChawn, Keon, Kierria, Gary III and Kandace. A host of family and friends.

Willie James Bell, Jr. was born on August 9, 1924 in Smithville, Texas. He was the only child born to Willie James Bell, Sr. and Fannie Bryant Bell. Upon graduating from Smithville High School, he entered the U.S. Army in 1943. After serving... View Obituary & Service Information

The family of Willie J Bell Jr created this Life Tributes page to make it easy to share your memories.

Send flowers to the Bell family.