We have years of experience caring for families, from all walks of life. Each family comes to us because they know we are leaders in our profession, dedicated to excellence in service, and have the highest integrity. 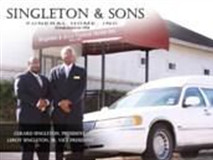 In 1934, Singleton and Green Funeral Home was established by two farmers, John H. Singleton and Peter Green. The business began in a house located at 416 7th Street in Hempstead, Texas. There was no formal business plan or feasibility study done. Two entrepreneurs recognized a need and decided to start a business. Hempstead did not have a funeral home to serve the black community. The amount of startup capital is not known.  It is known that the two men pooled their personal resources in order to open their business.

There were many hard times in the beginning. Because both men were farmers, they did not have normal business hours. There were times that neighbors took messages for the entrepreneurs. On occasion and when needed, messages were delivered to the farmers while they were working in the fields. This was done because the telephone was left on the front porch with an exterior bell that alerted the neighbors of a call.

The partnership was dissolved in 1933 when Mr. Singleton bought out Mr. Green. The name of the business then changed to Singleton Funeral Home. The location also changed to 626 7th Street.  In 1934, Mr. Singleton’s sons joined him in business and the name changed once again, this time to Singleton and Sons.

Although a success, the Singletons were licensed funeral directors but not embalmers.  The business did not have its own embalmer until 1945. Eldridge Dyson, the grandson of John Singleton, was employed by Singleton from 1945 until 1952. Until that time and after, they relied on other embalmers. These professionals would be called or, if they were in the area, they would stop by the business to see if their services were needed.

Under the direction of Oscar Singleton, the business continued to grow. A final move was made to 627 New Orleans Street in Hempstead.  The lower level contained the embalming room; the main floor housed a mini casket display and a chapel that seated 25.

Oscar Sr. became the sole proprietor after the death of his brother. In 1983, Oscar Sr. was diagnosed with cancer. At this time, Mr. Singleton told his son Leroy about his concerns for the business. He stated that the community had been good to his family and he just didn’t know what would happen after his death. Leroy told his father not to worry; he would continue the family business.

In the summer of 1998, Singleton and Sons has completed the first phase of remodeling with plans to give the firm a totally different look as they head into 2011. With the support of the entire Singleton family and community, dreams of staying above the competition have made its mark. Singleton and Sons Funeral Home is definitely here to stay. Other competitors have come and gone; but Singleton and Sons, Inc. has stood the test of time.

Gerard Singleton was born and raised in Hempstead, Texas. He attended and graduated from Prairie View A&M Univerisity with a B.S. in Engineering. Seeing a need to help his father, Leroy Singleton, in the family run business, Gerard attended and graduated from Commonwealth Institute for Funeral Service with an Assoiciate in Applied Science degree. Gerard has brought a fresh start to the 75 year old firm. To face the needs of the business, he has taken an all hands on deck approach.

Leroy Singleton, graduated from Prairie View A&M University with a degree in Industrial Art Education and a Masters in Education in Counseling and Guidance. Prior to making a promise to his father to carry on the family owned business, Leroy owned a long haul trucking business. In 1984, Leroy received a degree from Commonwealth Instutute of Mortuary Science. He passed the state board and became a funeral director and embalmer. In addition to being an entrepreneur, Leroy was elected as the first black mayor of Hempstead in 1984, a seat he held to 1990 and served as county commissioner from 1997 to 2005.

In the 1980’s, I started helping Mr. Oscar Singleton, Sr. around the funeral home and found my calling in serving others. Serving others became as natural to me as taking a breath. I just love what I do.

Graduate of Herman High School, Van Vleck, Texas. Received a Certificate of Proficiency in Secretarial Science and a Bachelor of Science Degree in Business Education from Prairie View A & M University.Worked for the University as a Senior Secretary in the Financial Aid Department for 34 years and worked part-time for the funeral home. After retirement from the university, I came on board at the funeral home full time.

In Loving Memory of a Great Woman

John Henry died in September of 1972

Mr. Dyson attended Sam Schwartz High School and graduated in 1941. He attended the School of Engineering at Prairie View University, and graduated December 19, 1942. Mr. Dyson attended Landig College of Mortuary Science where he became a professional embalmer, May 30th 1947. Mr. Dyson was the grandson of John Henry Singleton.
Mr. Dyson was Singleton and Sons Funeral Home's first embalmer. He served as embalmer until 1952.